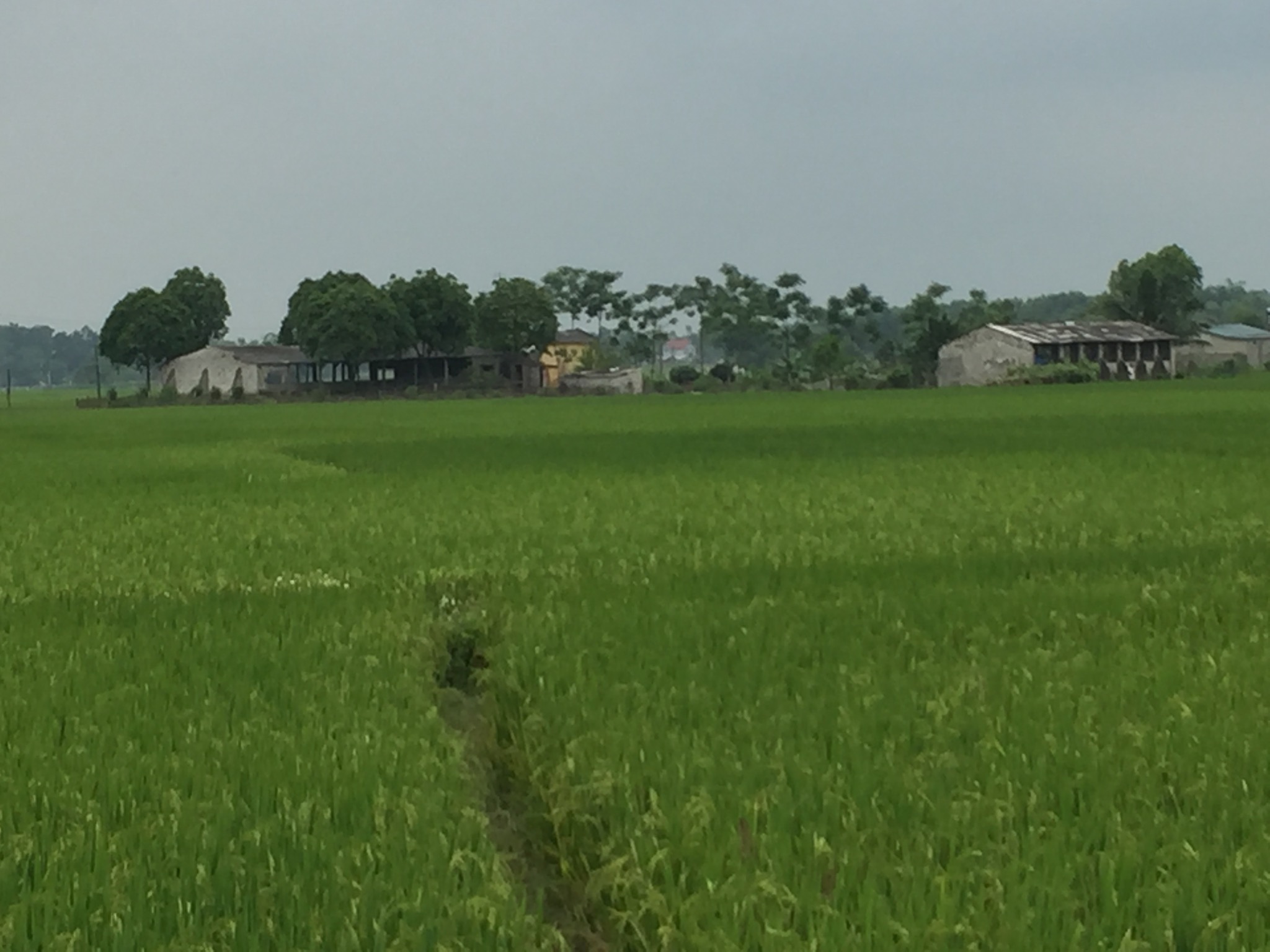 We woke up to the sounds and smells of bread being made in the local banh my (bakery), looked out of our bathroom window and could see fresh rolls being prepared for the oven. Unfortunately, it’s only 5.00 a.m.

After a couple more hours sleep we drag ourselves up and hurriedly pack. We have to be out by 8.00 a.m. (one of the nuances of the Nha Nghi). Motorbikes loaded and the room paid for, I head to the bakery to buy a couple of fresh warm rolls for breakfast. We start off on our ride out of town and aim to get a few kilometres under our belts before we stop for our breakfast rolls. The town’s pretty busy and bigger than we expected. A few areas that look to be CBD/office districts and more western style shops and cafes than we’ve seen since Hanoi.
The road out of town Criss crosses a small river a few times and there’s a lot of farmland on either side. Predominantly corn growing close to the road, and actually more empty spaces on the road between villages than we’ve been used to. We take advantage of the relative quiet countryside and pull over at side of the road after about 30km for a breakfast of fresh bread and water. Basic but delicious! We only stop for a very short break as have a long ride planned for the day.
We fairly quickly leave the winding farmland roads and join a relatively major highway. With the change in roads comes a considerable uplift in pace. We’re heading east towards the border town of Thi Tran Dong Dang (borders China). This section of road is fairly anonymous. It winds for kilometre after kilometre, with freshly laid Tarmac and contra flow systems every 5km or so. We keep the pace high to get off this road and back in to country Vietnam.
At the 140km mark for the day, we reach the junction to turn south and off the highway. Goodbye big trucks and heavy traffic, hello windy country roads.

The bikes are coming up to their 1,000km old milestone, and we agree to stop and get a bite to eat at the next place we see. It turns out that for the next 10km we see nothing but small farms and countryside. Then entering a small village at Xa Bang Khanh we see three very small eateries with people sat in each. We stop at the one on the right hand side of the road and walk past the local men eating and doing shots of a local corn spirit. The open kitchen has some meat, a few gigantic pots on the boil and what appears to be rice noodles. A lot of pointing and signing later and we are served a bowl of pho soup (without the noodles) and some cold noodles on the side on a plate, and a couple of orange drinks. It may not sound the most appealing, but it definitely hit the spot. 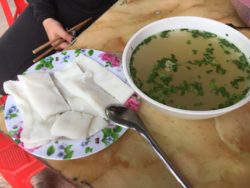 Tastes better than it looks!

As we hit the road again, we’re anticipating about 80km to the coast east of Halong, and hopefully the rest stop for the night. We agree to ride for an hour and then a short rest before the last hour to the coast.
After the first hour we stop for some water and a few biscuits. The countryside is absolutely beautiful and the road conditions have been excellent. Light traffic and very few potholes. We ride the second hour, and the maps show us approaching the coast. We make it to the junction with the “coast road” and turn right (west) towards Halong. Both of us are expecting beautiful scenic views as Halong bay opens up. There are a few glimpses across the muddy river delta towards the Halong peaks in the distance. Our minds are however more focussed on two other things; the fact Halong is still 80km away (and we’re knackered), and how industrial the area is! The road is exceptionally busy with buses and large articulated lorries. The skyline is littered with views of a couple of enormous power stations and the largest open cast mine we have ever seen.
We ride on through a couple of small townships that are exceptionally industrial and unbelievably dusty. There and Nha Nghi’s, but we opt to keep moving. We eventually reach a town called Phuong Cua Ong. Whilst still industrial, it looks to have more options than previous settlements and we can’t face another 40km to Halong.
We ride the length of the town and note a few Nha Nghi’s on the way. The one at the far end looked best, so I check out the room and haggle on the price (from 400k to 350k). The lady who I’ve just haggled with then directs us to put the bikes inside. This involved riding the fully laden bikes up a 1 foot wide steep ramp in to the building. A feat made more challenging by the lack of run up, and shiny slidey tiles at the top of the ramp!
Once we’d completed our small bit of stunt riding and done our unpack and showers, we headed in to town. To walk the town end to end took about 15 minutes. It was 7.00 p.m. and most places were closing up or already closed. We spotted a few street food vendors and wandered over for a look. Before we’d decided whether we wanted to try or not, we were invited to sit. The woman at the stall had a pan steaming away with a flat plate on top of it, and a lid over. She would scope a small spoon of batter type liquid on to the plate, close the lid for 10 seconds, then scoop off what looked like a combination between a pancake and a bit of rice paper, but gooey. She would then put some unknown substance inside, roll it, chop it, and serve it. Having no idea what it was, we ordered two plates worth. A dipping sauce arrived along with some of this strange gooey food and some fried Spring rolls. We ate the lot and loved it all. Still however have no idea what was inside. We then wandered back through town to our Nha Nghi for the night.

Full route for the day here: 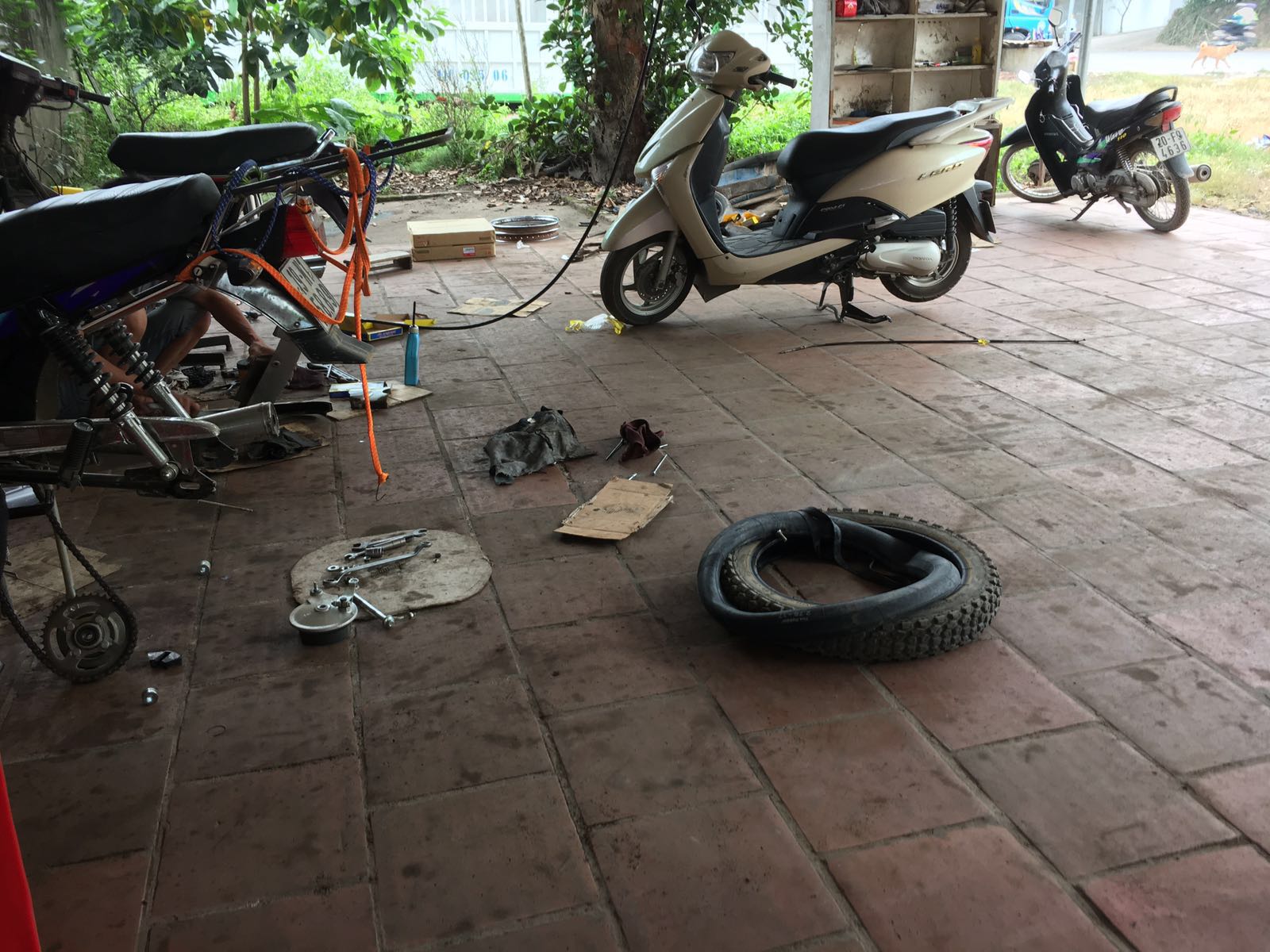 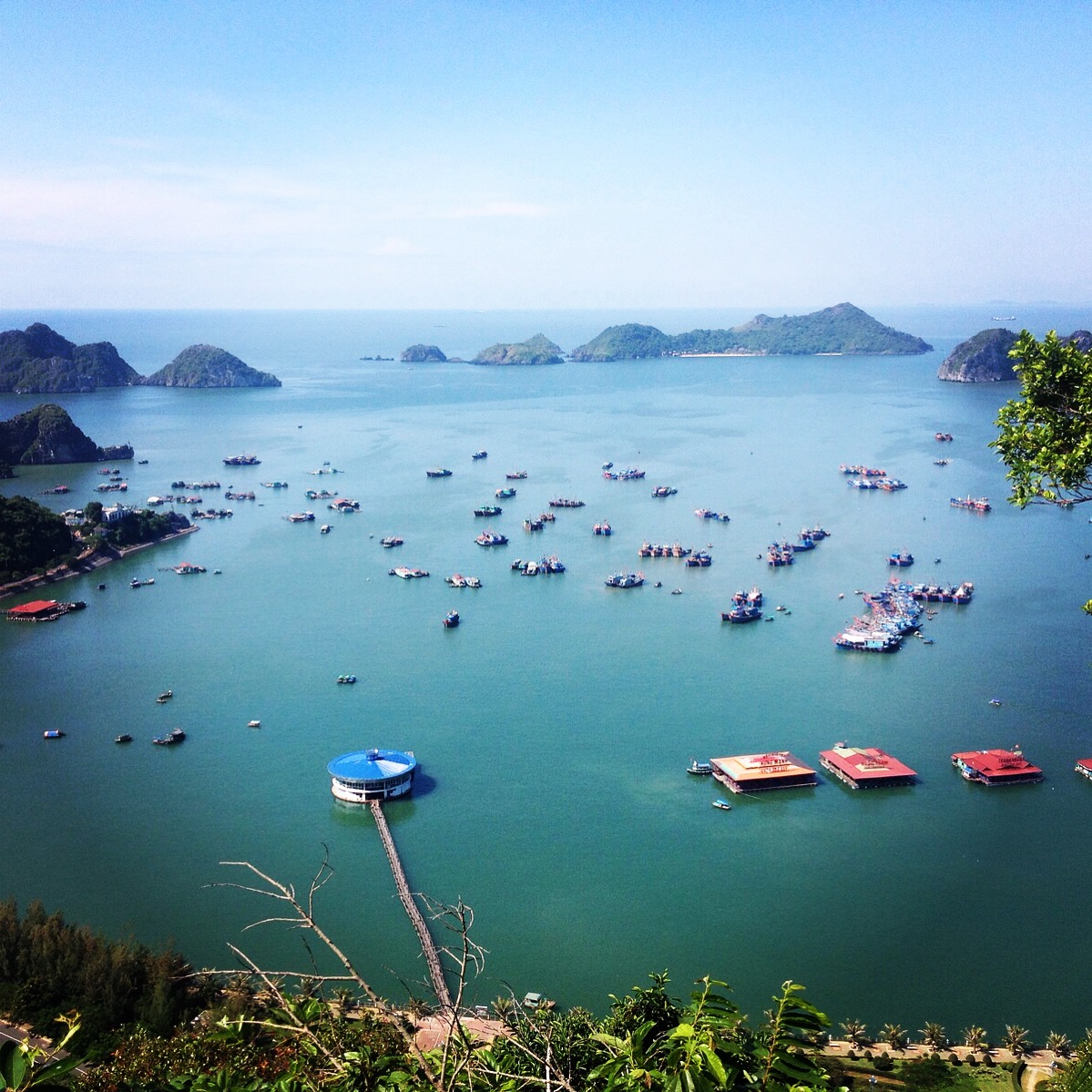