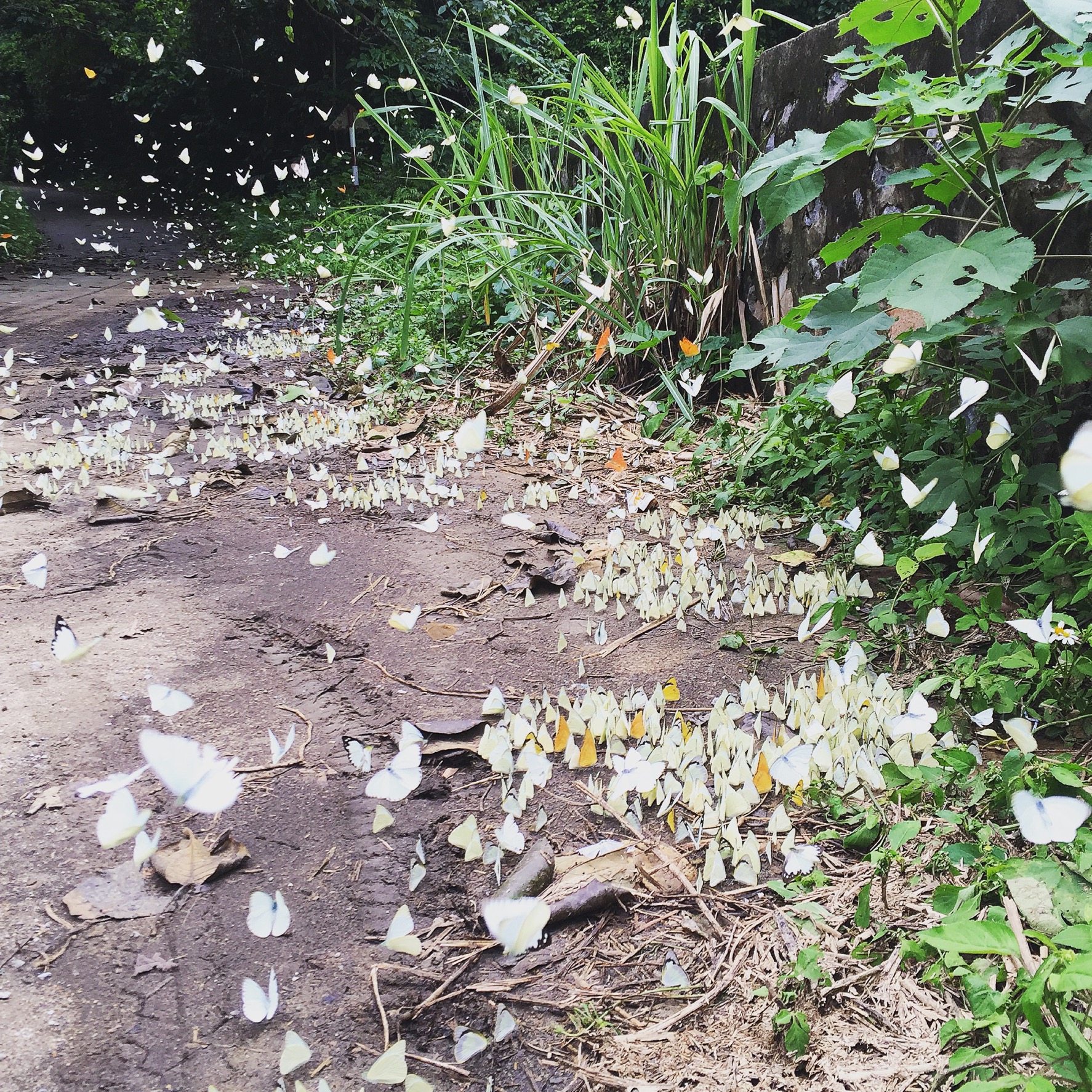 We started off from the hotel nice and early, planning to get a bite of breakfast somewhere on the road before heading up towards the Cuc Phuong national park. The weather however made our decision on where to stop for us. A sudden torrential shower started right as we were passing a small Pho shop at the side of the road. We pulled in and parked the bikes up under the cover of trees before taking our seats. A couple of exchanges of pointing and attempting to communicate and we were convinced our breakfast was on its way. However the lady who had dashed inside then reappeared with a can of coke. We took another attempt at saying we were there for breakfast and this time another can of a local drink appeared. Some laughing and chatting by everyone at the Pho restaurant, followed by pointing in bowls, and we finally got our message across.
As the Pho arrives at our table a few minutes later, it has a familiar smell to it. Memories of the previous night’s far from spectacular dinner. Not put off though, we start to eat. The Pho is relatively bland, with a bizarre fish taste. The lumps of “chicken” turn out to be tofu, and the smell is from the fish balls. Not the tastiest of breakfasts, but we made do.
The road out of Ninh Binh takes us just north of the amazing grottos we visited yesterday. The roads are good condition and quiet but for local traffic (so watch for people turning on to and off the road with little or no warning). The views in all directions are fabulous, and we can see the mountains of Cuc Phuong rising out of the haze in front of us. It’s quite a steep climb up narrow roads as we near the park. Single track road with quite a lot of bumps and potholes to be wary of.
We turn in to the park gates at 11.28 a.m., just in time to read the sign that the endangered primates and the turtle sanctuary close at 11.30 a.m. and reopen at 1.30 a.m.! Not deterred, we stop off for a quick cold drink at the small cafe near the gate, then proceed to buy tickets to ride through the park (40,000VND each). There is no one else around at all, so we are hoping we’ve got the whole national park to ourselves. We ride in, and turn right to head down the 20km dead end road to the centre of the park. Within the first 500 metres there’s a stunning lake and thousands of butterflies all on the ground at the side of the trail. We stop to grab the cameras and take pictures and videos of this amazing scene. At this point we had no idea that for the next 2 hours we would be permanently surrounded by thousands of butterflies of all different a shapes,’sizes and colours – amazing scenes! 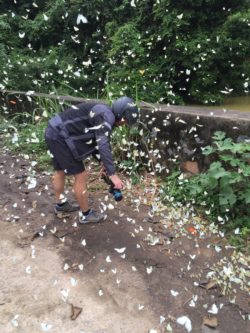 Eddie and the butterflies

We continued slowly on our ride through this fantastic natural wonder. The roads were very greasy and wet with leaf litter and mud, as well as being very narrow and steep in places. It turned out we didn’t have the park to ourselves and came across a couple of buses and a few others on motorbikes and scooters. But for the two hours we were riding through here past the “Big tree” and “old caves” we were mainly on our own and surrounded by nature. At the very far end of the road there is an “adventure trail”. We had a look up this path, but it clearly was not intentioned for motorbikes!
After riding back down the road and taking in a few more photo stops for butterflies, we arrived back at the gate house. Bang on 1:30, so the primate centre was now open. Tickets purchased (40,000VND) and we wandered down to be greeted by our guide. She took the two of us an a Vietnamese family through this awesome sanctuary. Some of the worlds most endangered primates are cared for, bred and resettled from here. The Various varieties of Langur’s were great to see, but the gibbons stole the show with their swinging through the cages. Looking forward to going on a gibbon safari in Laos! 🙂
After another stop for refreshments at the gate house cafe, we mounted the bikes for the ride out of Cuc Phuong and off south. The relatively narrow and quiet country roads continued, and we were wandering where we were going to spend the night, as all the “town’s” on the map were turning out to be tiny villages with no accomodation. We entered another of these towns towards the end of the afternoon, but this one turned out to be considerably bigger and more vibrant.

Thanh Nha Ho had a bustling market place in the middle of the Main Street, and a Nha nghi just beyond it. We unloaded at the Nha Nghi and quickly showered before heading out to catch the market before it closed. A couple of vendors had meat rotisseries on the go, so we walk up to pick our meat. The skewers look excellent, so we buy two. Everyone in the market is friendly and taking in the sight of the two westerners wandering through. We stop at the bakery to grab some rolls and also pick up some pineapple from a stall. We found ourselves a quiet spot just off the main street to eat our feast. A few surprises came out of this – firstly the bread was exceptionally sweet, and secondly – the meat was not what we expected. Very gristly, tough and a really strong flavour. Not a meat that I recall tasting before, but makes me wander whether it may be canine in origin. We ate as much as we could manage and then filled up on pineapple.
Before heading back in to the Nha Nghi for the night, we decided to take a walk to the other end of town, and perhaps get a quick beer on the way. As we were literally at the far end of town, and so far no beers spotted, a noise from over the street grabs our attention. A small place off the street rammed full of men drinking beer. We decide to go in. We are welcomed right in, and sat down with two icy cold tap beers in front of us. A few of the staff join us to have their pictures taken with us. Then a couple more beers. A youngish man from the table next to us turned around and passed me a full beer, cheersed me then downed his beer. He then set off to another table and returned to present us two roasting hot banana leaves. As we opened them we found sausages inside …. Delicious! This was such a friendly place and we stayed for more beers than we needed (12 beers – 70,000VND) before heading back to the Nha Nghi for some rest. 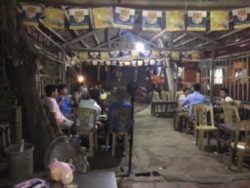 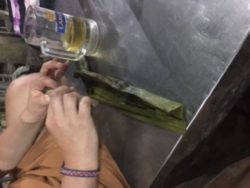 Full route for the day here: 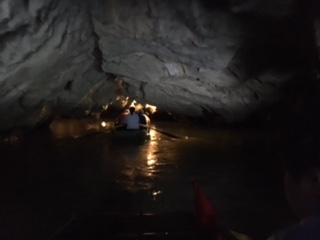 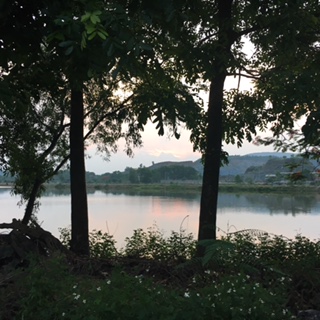