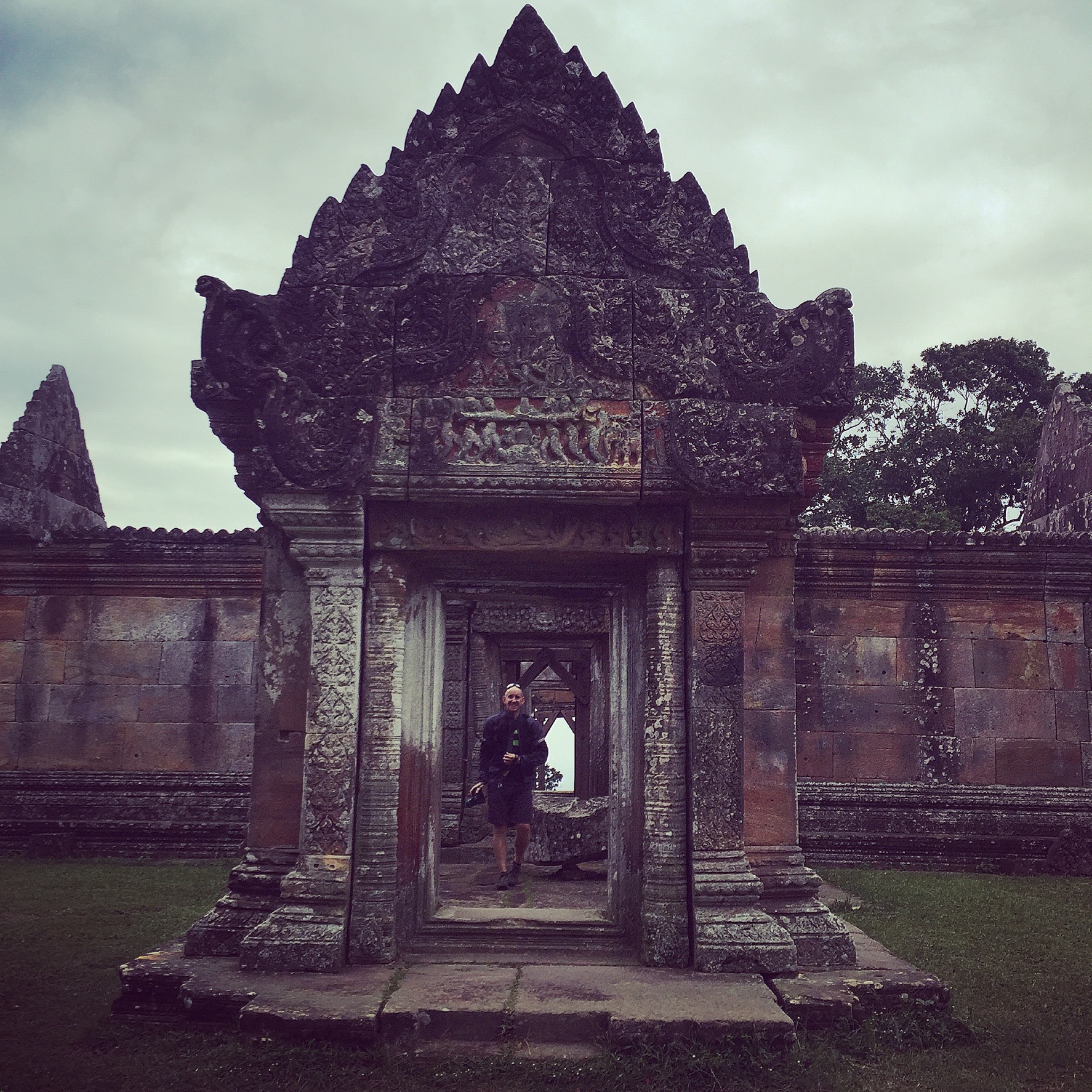 We’re up early for the days ride up to the temple. After a quick Skype session with family, it’s time to pack up. The views over the local village in the morning showcase the market and people going about their business in small shacks along the dirt road near the roundabout.

By the time we hit the road it’s just gone 10.00 a.m. We stop to grab a fill up of petrol on the way out of town. The views from the road are amazing as we look to the south up the jungle clad high rock escarpments. The road itself is excellent, and very quiet except for Rotorvator carts and trailers with people and produce and occasionally school kids coming out of school for a break. There are still a large number of land mine warning signs at the side of the road to highlight the remaining dangerous legacy from the conflict.

At the side of the road the forest thickens up considerably, and whilst there are a fair number of small red dirt tracks doing in to the forest, there is relatively little sign of life or farming. In between the trees there are occasional small patches of beautiful white flowers.
After 50 kilometres or so a collection of modern looking houses on stilts begins to appear. They are evenly spaced at the roadside, but with no agriculture around. It takes a while to work out that they are military housing, for the significantly increased military presence we start to see up the side of the road for the next 30 kilometres. Flash 4WD in camo green with military insignia, large compounds with shelters housing big trucks and people transporters, all with sand bagged guests posts on the roadside. This area has been a hot spot with Thailand in the past, and clearly not forgotten.

We ride past a large modern looking motel about 8 km out from Sra’Aem, but after enquiring on the price it turns out to be too expensive, so we continue on in to Sra’Aem itself. At the roundabout we spot a clean looking guest house and check in and drop the bags off the bikes. For lunch we try the fried chicken stand at the roundabout in to town. Whilst not the best food we’ve had, it hits the spot and leaves us ready for the adventure up to Preah Vihear temple. The Guest house owner warns us the road is steep and to take a moto taxi from ticket office.

On the 20km ride up to the ticket office, the Military presence is even more obvious with small based on both sides of the road. We pass some amazing trees that seem to be being strangled by other trees growing around them.

The cliffs that adorn the border and rise up to the temple appear in front of us stretching as far as the eye can see east and west. Exceptionally impressive! We are starting to wonder how they got the stones up to the temple, when we pass a very large square artificial lake on our right – part of the complex, shortly after is a right hand turn up a dirt track signposted to the ancient stair case (something we want to visit after the temple).

As we turn in to the ticket office car park, it is surprisingly full of loud rowdy moto taxi drivers and a number of 4wd guide vehicles. The tickets themselves set us back US $10 each. The woman at the counter then asks us how we are getting up the hill and also warns us it’s very steep. Two warnings…. How bad could it be??

We set off to the temple, and the first section of road is easy and about 15% gradient with a series of switchbacks, but a decent ride with amazing views. And then, the road stops!

Taking its place is a very very steep rough concrete track (20% gradient) which veers off to the left. We watch a couple of 4WD’s slowly descend the slope, and then decide to set off. I ride up to the first corner in second gear and stop on the flat of the corner and call Tracey up.

We then look up to the left and it gets steeper still with no obvious stopping point. With a run up, this section is just about doable in second gear, but struggling towards the crest, beyond which the track turns right and gets steeper still after a very very small flatter area.

A 4WD crawls past us up the very steep section whilst we’re stopped.
We let it get over the crest and then engage 1st gear and start the climb
There is no flat section above the crest, so need to carry on up the next, steeper still climb (30% gradient).

At the flatter spot above I stop, and wait for Tracey. The soldier stationed in the sand bagged bunker shouts at me and walks over to me along with his senior officer, AK47 lifted from hanging to his side, to in his hand. I’m pointed at to keep going, and through a series of hand gestures and smiling, I try and explain Tracey is still coming up… I slowly put the bike on to its stand and remove helmet. All whilst still smiling and maintaining eye contact. The three of us then walk to the edge of the very steep section to see Tracey ride up and over the edge to my encouragement. This brings a laugh and smile to both of their faces, before sternly gesturing us on again! – It turns out Tracey had slowed to a halt on the very steep road, and just managed to stabilise her bike before being assisted by two locals who ran over and helped push and stabilise the bike to get it started again, Tracey driving in first gear. Turns out both the guest house owner and ticket office worker were both right about this being steep!

The final few turns, whilst steep, are nothing compared to what has gone before. We then arrive at the relatively flat rocky muddy car park area with markets around the side. There are a number of 4WD parked at various angles over the rocks and ditches. We are directed to the far end of the car park by the park gate, and invited to park (on what turns out to be a pile of glass…. Nice!).

Once parked up and tickets checked we start to walk up the hill towards the first of the temple buildings. There are a series of sand bagged military bunkers on the left along Thai border.
We walk up to the base of the temple, having no idea what is ahead, we are blown away by the snake head statues on this 1,000 year old temple. Then the amazing stone paved entrance walkway up the hill to the temple stuns us. But once up at the temple itself we are blown away. The temple complex is 100 years older than Angkor Wat, 525 metres up a cliff, with amazing intricate carvings, stone terraces, a series of large pools, and a 10 metre wide staircase that ascends the entire mountain. Unbelievable! There are trees growing in to the buildings, but despite this and the series of conflicts in the area, the temples are in fantastic condition.

Towards the top temple there is an amazing view across the plane and down to the two huge man made lakes below on the valley floor. The cliff edges are endorsed with carved stone battlements at the cliff top and some sandbagged positions. Given its location and difficulty to get to, there are very small groups of people which makes it even more special than Angkor to enjoy. 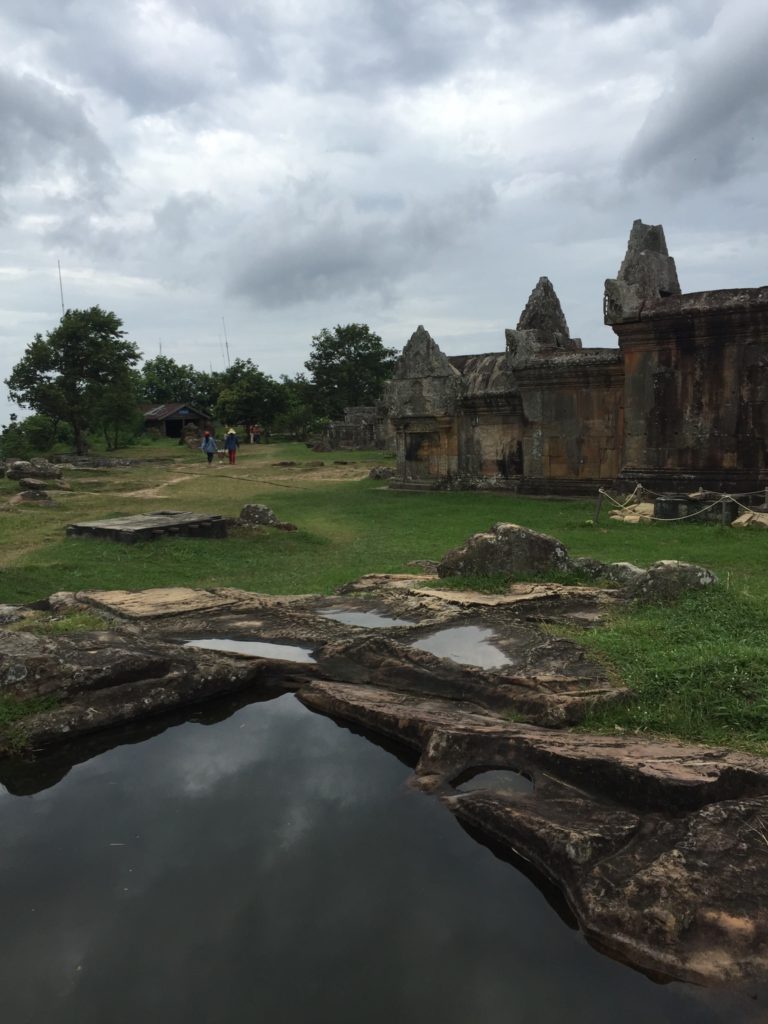 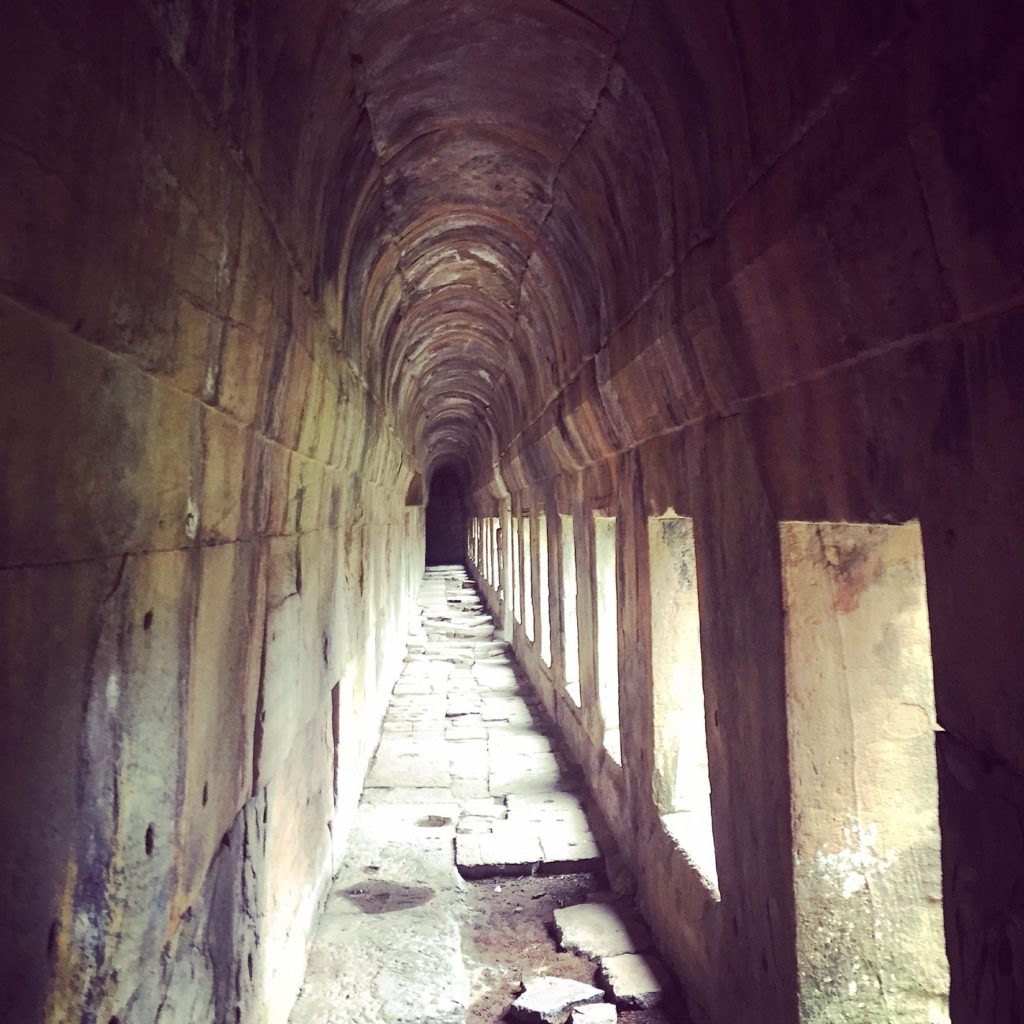 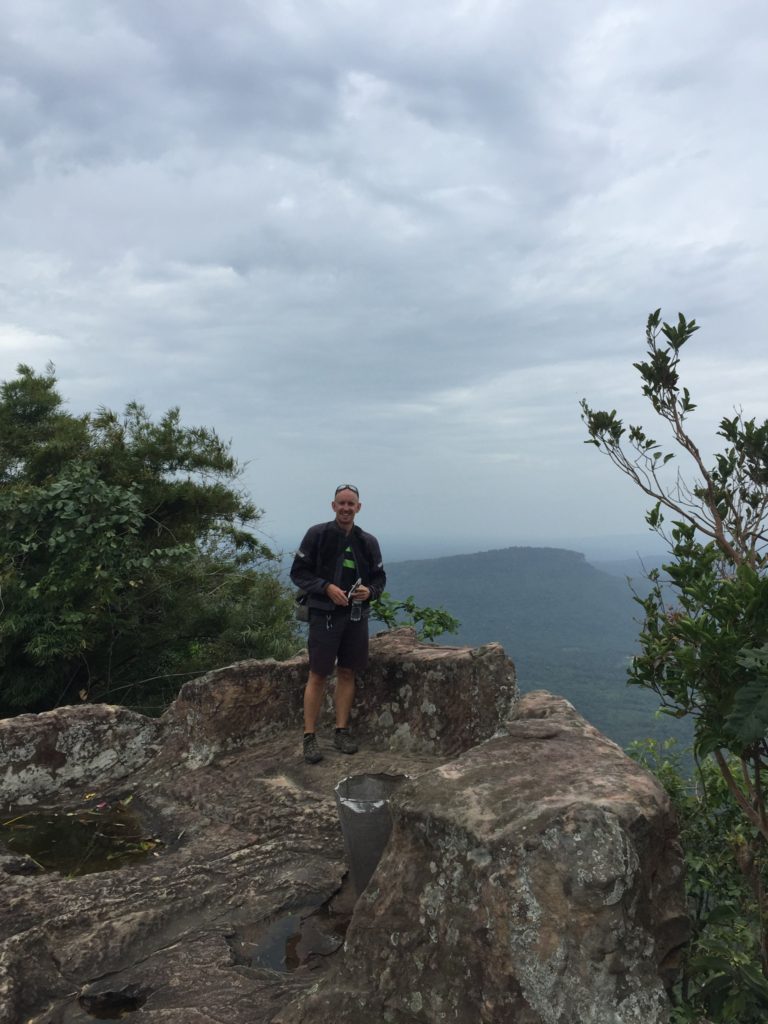 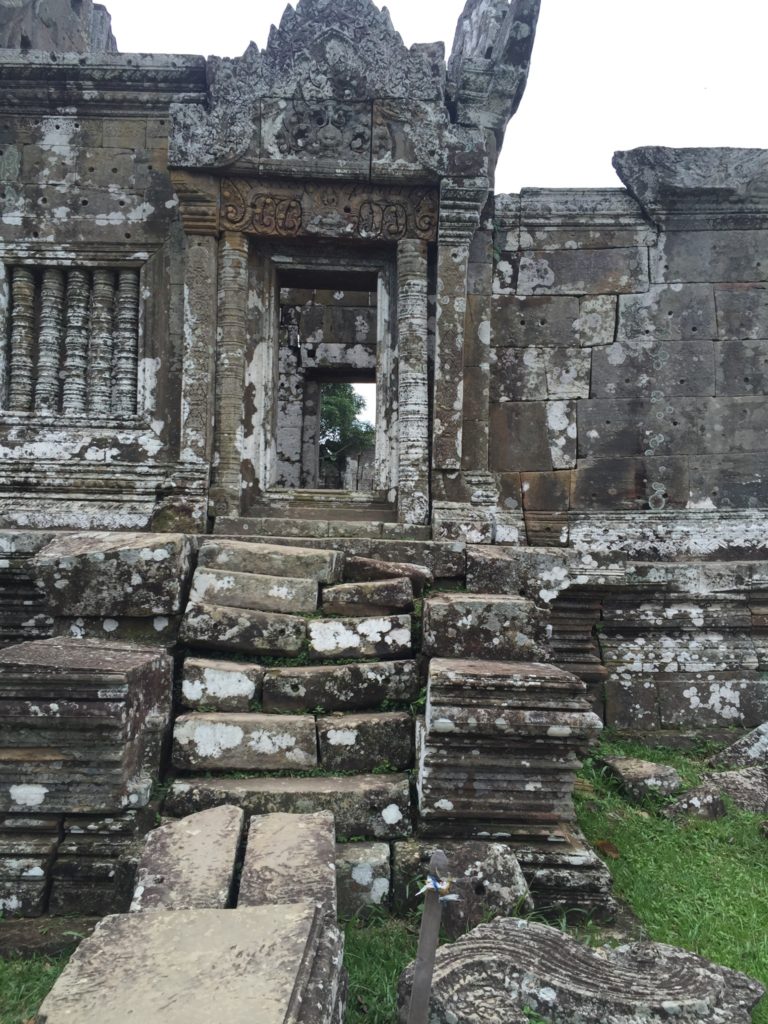 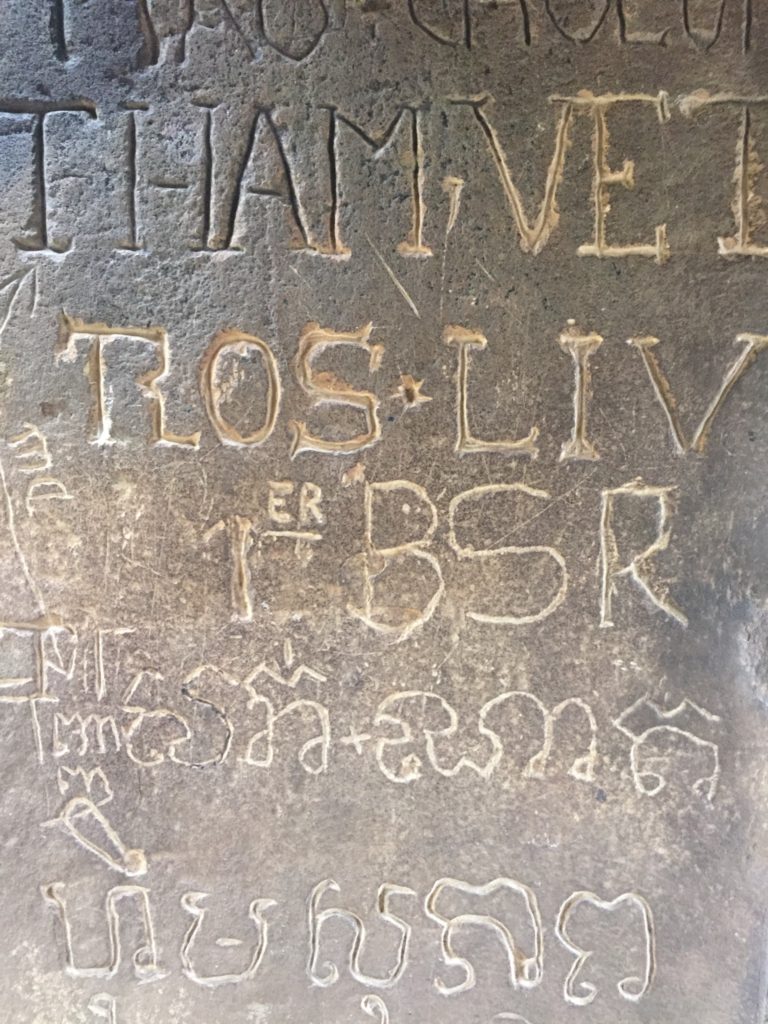 Surprisingly we found that we had good internet connection at the top, so took time to Skype my parents and show them around. As the light rain started, we took one last walk around in a near empty temple, back down past the sand bagged positions and grab a Coke from a vendor before setting off down the treacherous road.

Before setting off we check the brakes and ride carefully across the rocky muddy car park to the concrete trail. Over the first steep edge and it’s clear we need to be exceptionally careful on brakes otherwise we will very easily lock up (as I found out). A second gear roll down with back brake assist is the way forward. After the first steep drop Tracey is a bag of nerves. We stop only briefly then keep going, as stopping would be hard to get started again (and our soldier guard friends would not have welcomed it).

After the second drop it progressively gets less steep, but still maximum concentration needed until we crossed the small ditch back on to the road at the bottom. Phew! From here on down its the decent road, and we opt to cruise down in neutral back towards Sra ‘Aem.

On the way back south we take a left hand turn off the main road to go and see for of the ancient staircase, that goes from valley floor to the temple, an amazing feat.

Back on to the road south and we get some different views of the military buildings revealing not just military trucks, but also a number of large caliber anti aircraft guns pointed north.

Along the road there are a lot of Villagers heading home from work in the late afternoon, which gets us a few waves.

Back in to town and we drop the bikes at the guest house and head to the little restaurant next door for Khymer noodle soup with blood jelly and beer. After dinner we buy a couple of beers and snacks for back in the room and head back to get the grime of the day off us. 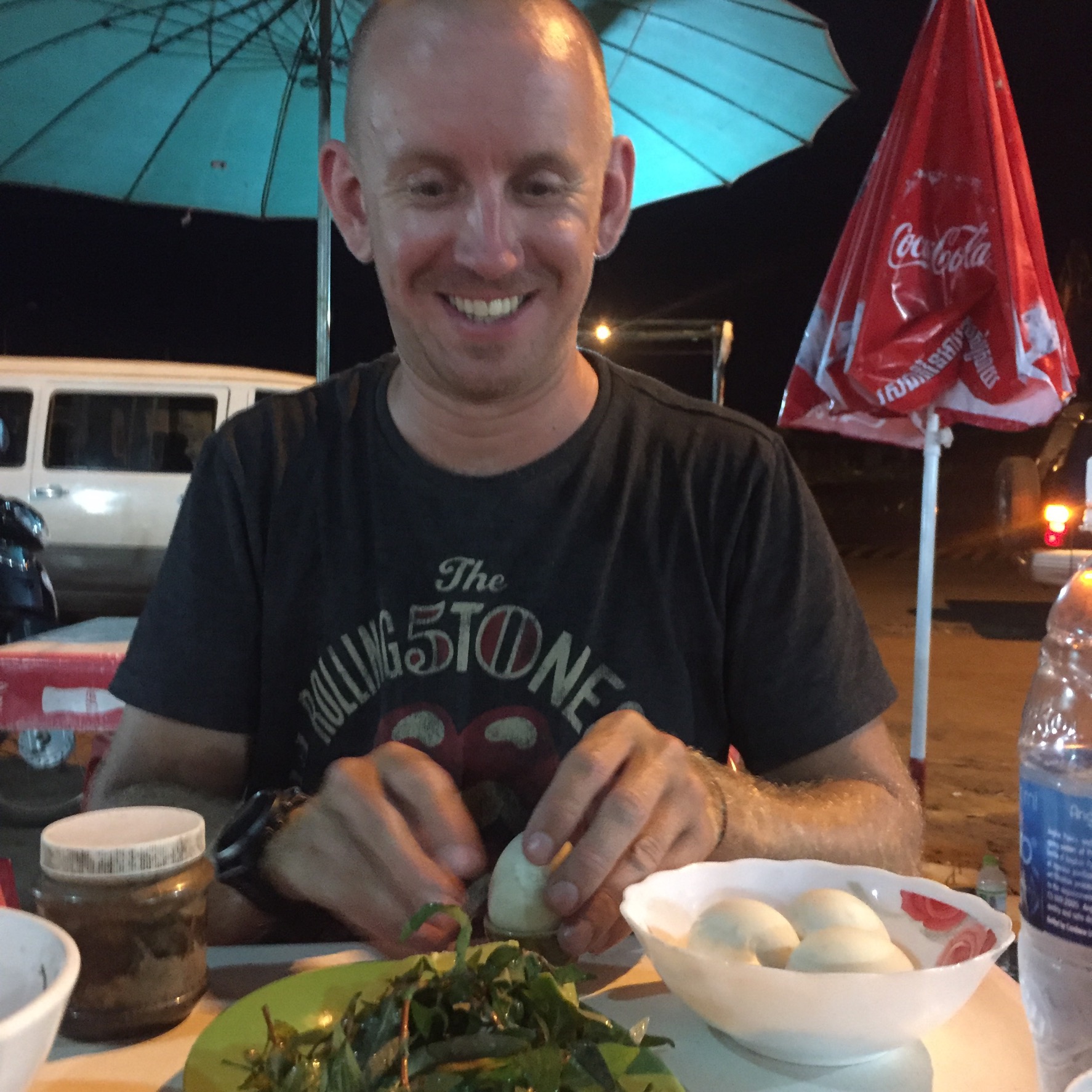 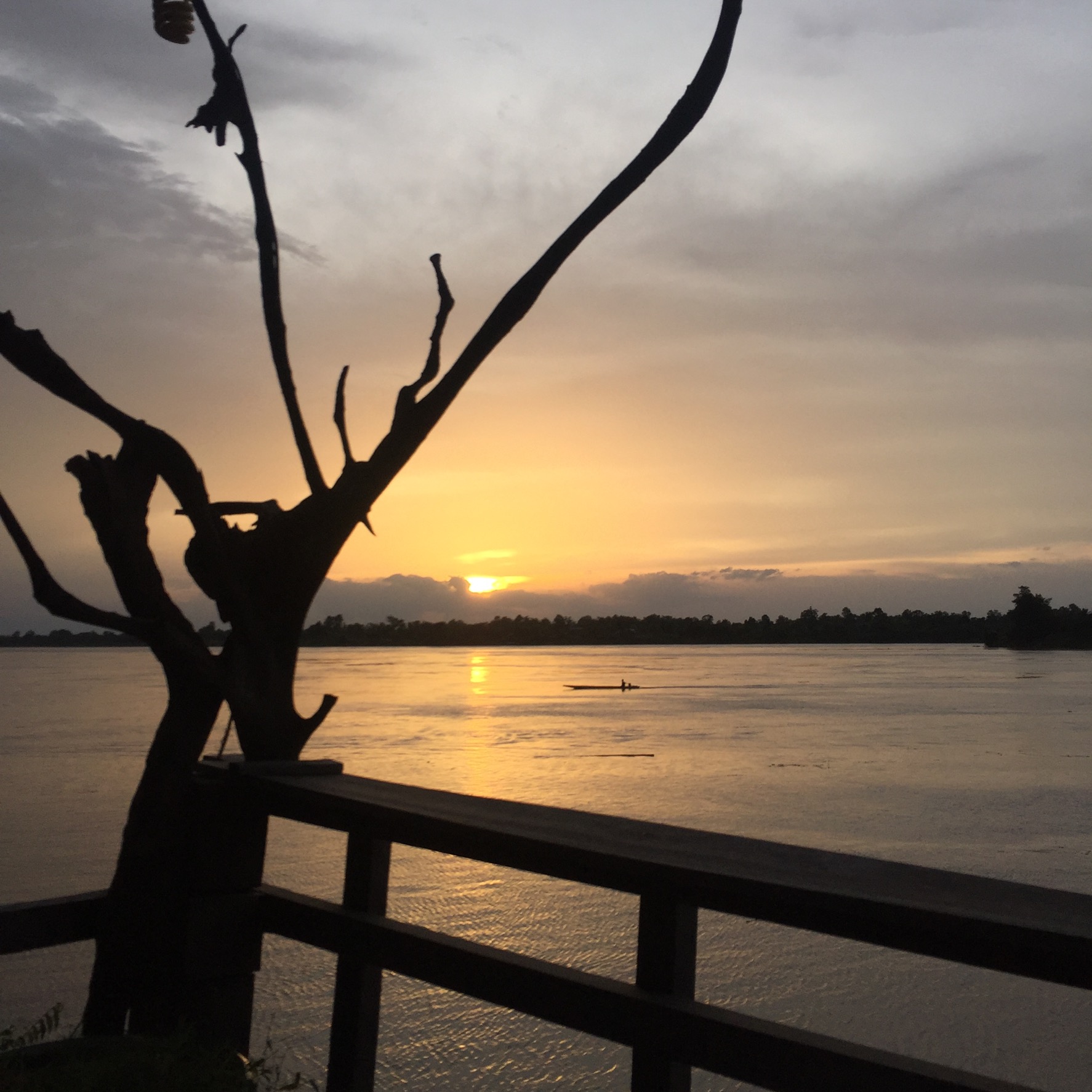